The Great British Spraycation: What happened to Banksy’s work?

During the summer of 2021 there were a multitude of incredible street art pieces in Suffolk and Norfolk which appeared out of nowhere. These art pieces were eventually claimed by Banksy, however their fate was vastly different to what you would normally expect.

At the beginning of August last year, multiple pieces of graffiti also appeared in Cromer, Oulton Broad, Lowestoft and Great Yarmouth. All of these pieces had the main parts of a Banksy masterpiece, and eventually the artist released a 3-minute video showing how he made them. The video was named The Great British Spraycation.

Despite the fact that region had a lot of CCTV cameras, Banksy managed to do all this work during the day. Apparently there were multiple groups of people, and some of them distracted any security so the others can fulfill and complete the art piece. The graffiti-filled model stable from the Merrivale Model Village ended up selling for £800000 to a collector. But what happened to the other pieces from the Great British Spraycation?

Dancers on a bus shelter The mural was created on top of a bus shelter in Great Yarmouth, in the Admiralty Road region. It took over a week for the piece to be confirmed, but it ended up attracting a lot of tourists. The piece is still there, although it’s protected with a dedicated film.

All in the same boat

This particular mural was found on a bridge in the Nicholas Everitt Park, at Oulton Broad. The artist used a corrugated metal sheet and other materials to create this masterpiece. Apparently the boat was removed because there were concerns there might be some blocking issues. However, this particular graffiti was preserved and they even added an UV-stabilized polycarbonate screen. You can still find it in the park, if anything this generated a lot of buzz for the community.

Gull and skip – Child with Crowbar 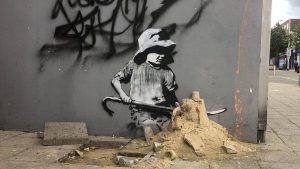 Banksy also worked on the gull and skip mural from Lowestoft, more specifically on the side of a house right at the corner of the Denmark Road. Just like the one from Oulton Broad, the Lowestoft art piece was covered with a protected screen, so you can still see it there.
That’s not the only Banksy piece in Lowestoft. He also created the Child with Crowbar graffiti on the side of a former electrical store in the city. The child is using a sandcastle to build a crowbar. He did use the physical aspects like adding a sandcastle and lifting some of the pavement slabs. This piece is also protected with a screen, however the building itself was sold to a private buyer, and the wall ended up being removed. Yet Joe Thompson, a graphic designer recreated the mural on the side of his home, yet he chose to add the piece in a vending machine setting. 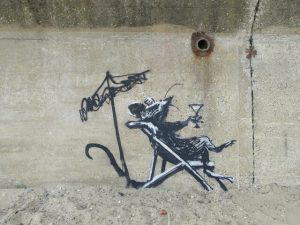 Rat on deckchair is bringing in the rat, which is one of the more familiar features from Banksy’s work. The interesting thing is that you can find it in Lowestoft as well, on the seawall near Links Hill. The piece itself is unique, it has a rat sitting on a deck chair and enjoying its drink. It’s close to a drain with waste water, so it’s definitely a bringing social commentary. The mural was modified by adding in white paint, however it has a protective screen and you can still see it there. 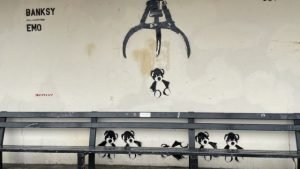 The arcade grabber from the north beach of Gorleston is pretty much what you would expect. It’s a piece showing an arcade machine grabber. However, the piece was vandalized and a few teddy bears were added to the entire piece. The Arcade grabber was cleaned and the authorities added a protective screen. This happened as soon as the local council received a confirmation this is a Banksy piece.
Another piece that Banksy had in Gorleston was the Model yacht pond dinghy. It depicts 2 kids clinging to a dinghy. It was right near the arcade grabber, but it was painted over due to a girl’s death that happened in the region. This particular piece doesn’t exist anymore, since it was removed by the council, however it might end up being restored eventually. 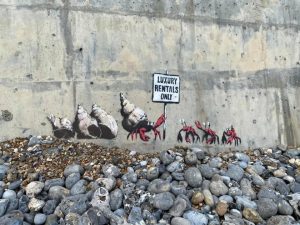 The Hermit crabs art piece from Cromer beach is one of the most creative Banksy pieces in recent years. It has a group of hermit crabs that hold a sign which says luxury rentals only. Why is this piece so important? Cromer is known for the high prices when it comes to housing, and the crab industry. The mural was vandalized at the beginning of the summer, but you can still find it there.

As you can see, most of the Banksy pieces from The Great British Spraycation of 2021 are still intact, albeit protected by the authorities. However, some of these art pieces ended up vandalized, which is unfortunate, because they brought great social commentary and made people think. The fact that you can still access most of these is great, and it’s a good idea to check them out if possible.